Ten Innings at Wrigley: The Wildest Ballgame Ever, with Baseball on the Brink, a book review by Rick “Shaq” Goldstein, 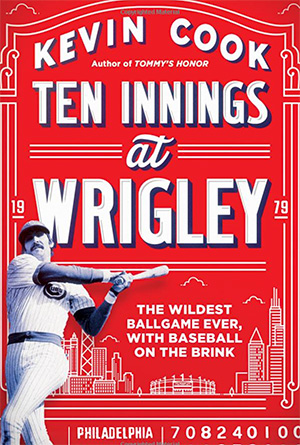 written by Kevin Cook. Shaq says: Forty-five runs in one game at Wrigley.. Too bad someone had to win!

I am writing this review on May 15, 2019… a mere two days short of the forty year anniversary… of one of the wildest games in Major League Baseball history. The “core” of this story is that memorable game… but in a few minutes I’ll explain why I say it’s simply the core…. First let me tell you how I “FEEL” about the author… and his writing style…

This is the third baseball book I’ve read… by author Kevin Cook… and like the other two… it’s delightful! If you’re a true diehard baseball fan… let me give you two examples of what it’s like “sharing” a story with Kevin. Let’s say you walk into a bar in the early evening… sit down and get a cold BREWSKI… and there’s a guy sitting next to you that you don’t know. After a few minutes a baseball comment is made… and a discussion begins. The first thing that becomes apparent is that this guy is a lot like you… in the fact that he doesn’t make braggadocios’ comments about his favorite team… without facts to back them up… he doesn’t just start ripping all the other teams with asinine “talk-radio-like” bull… he listens to your comments and stories with the same interest you do to his.

Each story… that may start on a current baseball event or player…. Like magic… tangentially… morphs with total sense to a story anywhere from ten… to yes… one hundred years earlier… and the fact that you never lose his interest…. And he never loses your interest… and every detail regardless of the historical time frame makes total irrevocable sense! You each bring the other to a higher… mystical level of baseball discussion. The next thing you know…. The bar’s flashing its lights on and off for last call….

A second example of what it’s like for a true baseball fanatic to get engrossed in a “discussion” with Kevin… would be to remember what it was like years ago… when they actually had weekend doubleheaders on beautiful summer days… when one ticket actually got you two games. You arrive early before the first game to watch batting practice… and you sit down next to a guy you don’t know… and when one innocent… intelligent baseball stat or story is stated…. Boom! The doubleheaders over… and it seemed to occur in the blink of an eye.

The storytelling in this book is about the May 17, 1979 game between the Phillies and the Cubs that ended in a 23-22 Philly victory in ten innings. After providing the starting lineups and team rosters… the author literally reviews entire highlights of both teams for over one- hundred years. The original owners… the ballparks before and since… and absolutely out of this world beloved baseball minutiae… and never… are there wasted words… boom… boom… humor… insight… 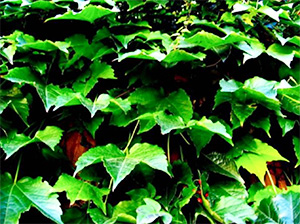 trivia… everything from Al Capone at Wrigley Field… to Bronko Nagurski running through the end zone and “banging his leather-helmeted head into the brick outfield wall. He jogged to the sideline, where Halas asked if he was okay. Nagurski said, “Yeah, but that last guy really gave me a lick.” Here’s a little taste of trivia… Who planted the ivy on Wrigley Fields outfield walls? The Answer: a twenty-three-year-old Bill Veeck in 1937! 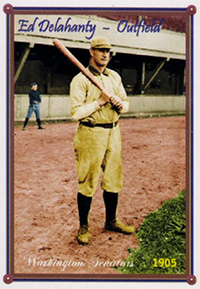 following season. Kicked off a train for being drunk and obnoxious, Big Ed staggered into the Niagara River and was swept over the falls to his death. They found his body under the falls a week later, naked except for his shoes, socks, and necktie.” Now that’s some interesting and fun stuff… and we haven’t even gotten to the FORTY-FIVE RUN GAME YET!

Each inning is covered in detail… with names like Pete Rose, Mike Schmidt, Bill Buckner AND teammate Dave “Kong” Kingman… the Cubs best average hitter… and the Cubs top homerun hitter… who hated each other! You had loud mouth Bowa… and classic catcher Boone… you had Tug McGraw… Sutter… Viet Nam vet….Garry Maddox… and so many others including the star crossed future all-star relief pitcher Donnie Moore (more on him in a moment)… and all the others listed in a hard to believe final box score near the end of the book. All the scoring… all the catcalls… side trips into the stands… and all the badgering back and forth between the teams. 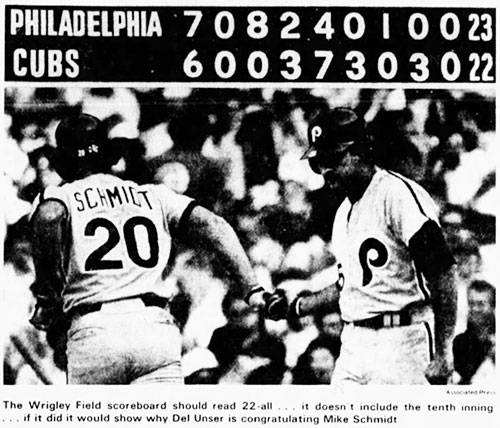 As if the layout of this book/story could even get better… after the game story is complete… the author tells what happened to many of these players in the decades after this historical almost comical game enhanced by the wind blowing out at Wrigley. But along with the baseball humor… there is much human tragedy… laid out at the end. Everything from Pete Rose’s betting… and lying… McGraw’s brain tumor death… and the saddest of all… Moore’s attempted murder of his wife… and his success in shooting himself in the head… to death. ..

This author handles the trivia… the humor… and the pathos… in a literary style… akin to the late Robin Williams… handling insane humor on the stage… and yet being able to bring tears to your eyes winning an Academy Award for drama… in Good Will Hunting. This is a brilliant baseball story… on and off the field. 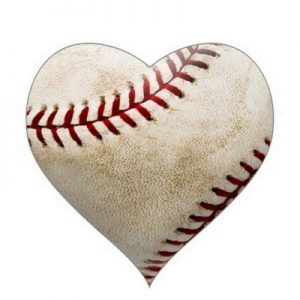